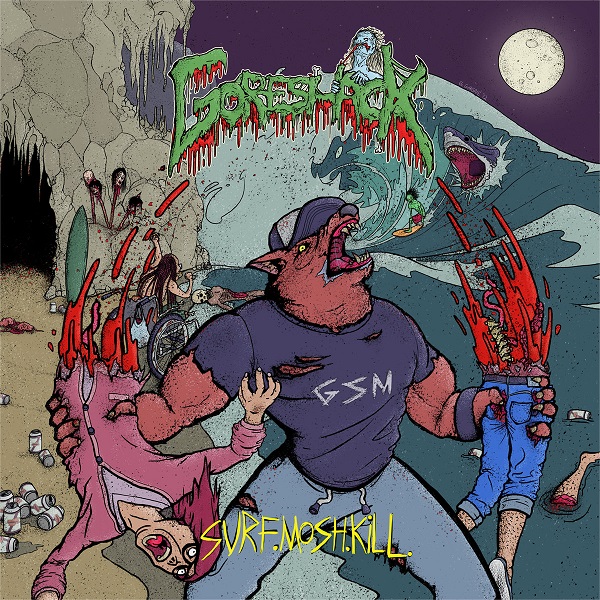 Fresno, California natives Goreshack found plenty of success with their self-released debut EP back in 2010. It earned them a very large and loyal fanbase rather fast. So, when they took to the internet to raise money to record their debut full-length album, Surf.Mosh.Kill, they made more than their presented goal. But, was this money used wisely, or is this recording one that feels a little more cliché for the death/thrash metal genre?

Surf.Mosh.Kill. does have a hint of a raw sound that is commonly associated with self-released albums. This isn’t too big a problem, but it definitely does pull energy out of some tracks. The guitars have a mid-range buzzing to them that does pack a nice blunt edge as it works with a similar sounding bass guitar, though slightly deeper, and a little lost in the mix aside when it becomes twangy. The drumming sounds rather natural, having a snap to the snares that can be a bit empty. The crisp cymbals don’t make much of an impact, but they do fill the music well enough, much like the clicking of the bass kicks that combine nicely with the snares. Finally, there’s the varied vocals of a deeper guttural approach, gang chants, and a higher pitch shout/rasp common with the style, all of which sticks out more than most of the instruments.

Anyone who heard their self-titled EP will be aware that this band is just looking to have fun, and it’s pretty obvious throughout the album, despite the lack of energy present at times. Thankfully, some songs benefit from being tamer.”The Curse of Nosferatu” comes off rather heavy, but it’s a catchy, slower paced offering that really relies on the drums to present that eighties Surfer rock sound Goreshack thrives on. The stoner spoken word introduction that discusses the theory as to why vampires eventually become gay is quite comical as well due to how out there and random it is, which is another perk that helps to set up some lyrical concepts a little better, o just eat up some time like the father cursing at his son woken word intro that kicks off the instrumental “The Sewage Serenade,” as well as concludes “Surf Nazis Must Die!”

“Goreshack” is one of the first to really hit the listener hard with a strong, energetic performance. This is largely thanks to the faster pace, tighter material, and even a bit of increased volume. It’s a catchy assault that will instantly become a crowd favorite, as will others like “Big Tits & Zombie Flicks,” a declaration of loyalty to those two very things. But, the most enthusiastic track here is “The Breaswtilence.” The mixture of death metal with grindcore anger and blast beats sounds great with the layered gutturals and rasps. The obviously comical lyrics end up similar to something that Troma might turn out in a film, if they haven’t already. But, the main reason this song sticks out and will get you pumped is the louder instruments, which is obvious after coming off of “Surfing Through the eyes of the Dead,” another good song by its own rights, but the music levels are a little lower, which nullifies the excitement and potential of the music and performance.

Surf.Mosh.Kill. definitely does have some faults in the production that holds back various tracks throughout. However, some benefit from it for the sake of catchy hooks and a surfing atmosphere or mentality. Meanwhile, there are some songs that tread into grindcore territory that really pull the enthusiasm to the forefront. If you liked the band’s self-titled EP, you won’t ne let down with this one. It’s hard to say Goreshack will really win over any fans due to the problems that have been mentioned, but it’s impossible to listen to this album and not hear the potential the band has, proving once more they are a group well worth keeping an eye on.

Digital review copy of this release provided by Goreshack.