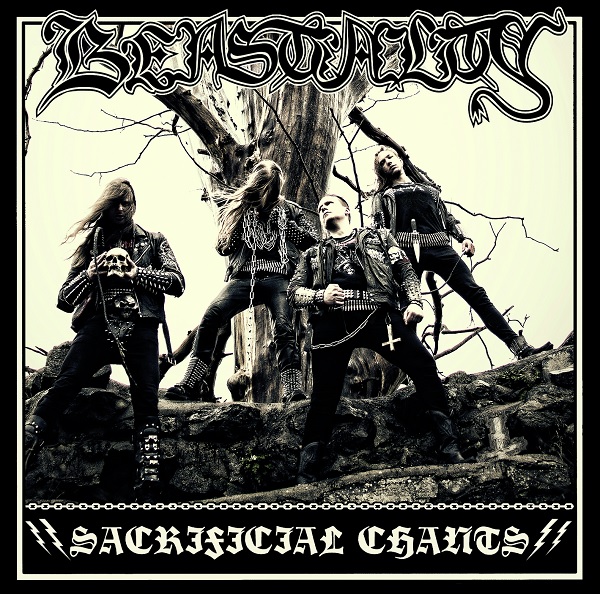 Sweden’s Beastiality formed around 2011, and has since only put out some minor releases. Of them, two were more than demos and a split. There was the Live in Stockholm in 2015, and their debut full-length Worshippers of Unearthly Perversions two years later through Invictus Productions. A few years have passed by and the four-piece remains with Invictus to unleash a new EP titled Sacrificial Chants.

Akin to most underground death/black metal outfits, the production of the effort presents itself as a rawer experience complete with heavy vocal echoes a la 80’s/early 90’s metal of all types. The only problem is this analog-ish trait comes off kind of flat. The performances are all fine, but the bite is not really present outside the louder “Intro”, high-octane assault of “Sinner”, and the more frenzied “The Black Sun Prophecy” with near overlapping vocals and a much more noticeable dose of enthusiasm captured all around. Sadly, even the latter two have their moments.

This isn’t to say Sacrificial Chants is bad. The title track is a solid one that brought up memories of early Faith or Fear at times with a haunting guitar solo, atmosphere, and Slayer-ish build ups. This all bleeds nicely into “Sinner”, which carries with it a heavy splatter thrash vibe similar to Impaled and Ghoul. Of the entire release, this is the most memorable, though “Thy Kingdom Dead” does stand up against it with more of a Marduk vibe to the blackened blast beats and war theme.

The only downfall to Sacrificial Rites really ends up being the flat chunks of audio that make up the five song EP. It’s a good release after years of silence that Beastiality fans or lovers of the more lo-fi black/death spectrum labels like Invictus Productions and Hell’s Headbangers are going to enjoy. Though the MLP record version will more than likely hit the spot over digital and CD formats, so make sure to consider that variation when placing your pre-order.

Digital review copy of this release provided by Invictus Productions.

Copyright 2012-2022 &copy; Apoch's Metal Review Apoch's Metal Review is a website dedicated to bring light to the best releases from the underground to the major players, and educate people why they are good, or what it is that makes them bad. Examined under the critical and unbiased eye of an open minded former Metal Director for WSFX FM, the mission is simple: To weed out the bullshit in Metal today.
Loading Comments...