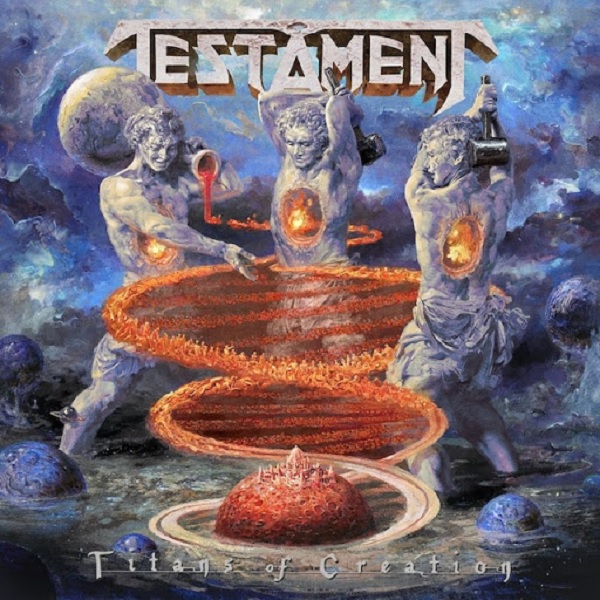 What can possibly be said about Testament at this point that hasn’t already been mentioned? The lords of thrash stormed onto the scene in 1987 with The Legacy, have been pretty active ever since, not to mention have unleashed a number of classic songs and albums for the style in their lifetime. To this day, the group continues to grow, experiment, and refuse to slow down. This is no more apparent than with their thirteenth studio album Titans of Creation, due to drop through Nuclear Blast Records. But is this new entry worth the hype built by the songs already streamed, or is it more of a flash in the pan this time around?

“Children of the Next Level” does set the tone of what to expect from Titans of Creation, though it isn’t exactly the output Testament stick to throughout. This starting cut throws in that typical brand of Testament enthusiasm with a heavy emphasis on grooves and some hardcore chugs scattered about such as leading into the simpler (though no less infectious) chorus. The closest to this level of energy is the chaotic “Curse of Osiris” which is damn near relentless in its old-school crossover assault with complementary harsher rasps and brief death metal bridges that make it seem as if torn from an eighties horror movie.

“Night of the Witch”, however, greatly shakes up the established format of the album back to the aggressive sound of 1997’s Demonic, a sorely underrated effort in Testament‘s discography that found the group dabbled in a death metal direction that wasn’t all that well received but seems to be a little more refined in this one particular track. “WW III” also has a darker tone to it that is complemented by the gritty NOLA southern sting felt throughout that adds a good deal of tension as the chorus climbs to it’s explosive conclusion. That climax makes for a nice bridge heading into the brief slam around four minutes to usher in a little more attitude before the whole thing wraps up. Then you also have “City of Angels” and its number of hazy, acid-fueled passages that incorporate a some fuzz into the mix.

While the conclusion to “WW III” isn’t exactly necessary and does feel a bit like the band is padding out the song just a bit, it works and remains an effective palette cleanser heading into the more upbeat and melodic “Dream Deceiver”. This drum driven track is a nice trip back to the eighties with a chorus reminiscent of material found on Set the World on Fire by Annihilator. Meanwhile you have the mental-health themed “Symptoms” which has a far more technical approach to it akin to “The Perfect Virus” from that very same band down to the point of similar pacing and Chuck Billy’s vocals on par with Joe Comeau’s. Aside the music comparisons, the song “Healers” also seems to take on a sickness angle that (according to the press release) “describes Billy’s own experience dealing with all natural medicine men; the elders of the earth, and how they managed to help him pinpoint and heal his past illness.”.

Overall, Titans of Creation isn’t a straight-forward Testament creation, as it explores different sounds and eras of the band’s history to explore various topics and personal experiences. The goal is make an album that likes to build things up, only to tear them all down. What starts as a fun and energetic effort gradually melts into a dark and sometimes foreboding world that replaces its energetic start with an intimidating and frustrated presence. Not every song works or hits as hard as the last due largely in part to how ambitious it all is. The amount of variety incorporated often just makes it incredibly hard to stay locked into one frame of mind for more than a handful of songs. However, as a whole, there’s no denying that Titans of Creation has some of the best guitar work and drumming to ever grace a Testament album, making it another hard-hitting effort from these thrash legends, not to mention one that fans of all walks of life within the style will find plenty to get behind.