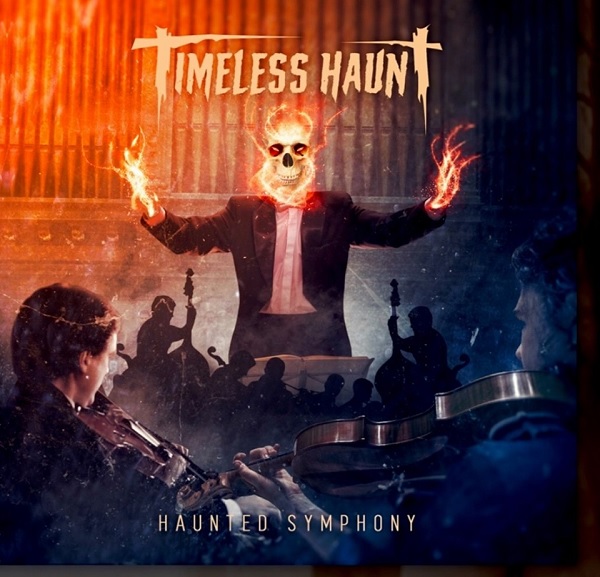 Update: An error was made and a wrong name was attribute to the band. This error has been fixed.
Timeless Haunt is a bit of a mixed bag of musicians from my neck of the woods. Within its ranks include John Jesuele, drummer for Beyond Fallen, as well as an “unknown” vocalist who has worked with one of the members in the past [his identity will remain secret for this review given that is how they are billed in the liner notes]. Only having just come together, the act has already unleashed their debut outing Haunted Symphony, a five-song release that is meant to not really fall under any particular categorization, but more the band just writing the songs they want to. So, basically, we’re looking at a progressive mentality here, or so they would make it seem. So, what exactly does this one have in store for those lucky or unlucky enough to happen upon it?

(Full disclosure: I am friends with John and the band’s vocalist, the latter of which is who sent over this physical promo. However, they are aware I will not be holding back, and both John and the vocalist reached out knowing they will get an honest opinion out of me.)

Given the way the band looks and the unknown vocalist’s outfit probably inspired in a similar way the vocalist of Them was by King Diamond, one might expect Haunted Symphony to share similar musical traits with that particular group or it’s predecessor. However, “March of Death” makes it pretty obvious this is not completely the case. Haunting synths and a slower chugging approach set up a dark world with a subtle brutality that marches along until the second chorus, breaking into a less grandious nod to Symphony X with some superb guitar work for the solo backed by a very deep bass presence that leads you back to the melodic hopelessness to wrap things up. It’s a solid start that establishes the general atmosphere of the release, though nowhere near as gloomy as things can get.

The lead single off the effort “Sands of Agony” kicks off with a really depressing piano piece, something that remains through what builds an eighties power ballad. It doesn’t quit fit the grim tone and ultimately seems far lighter in comparison, but while a bit of a speed bump it still remains a catchy performance with a simple, memorable chorus that I only wish had a little extra power in the music at the end, maybe hitting the chorus once gain with richer guitars, the drums filling things up a bit more, or even some background clean vocals as a discernible additional layer to push a (for lack of a better reference point) Meatloaf epicness it so clearly deserves.

And then there’s “Hellion Witch”, the lightest of the five offerings. There is a hint of progressiveness felt in some of the timing changes, but for the most part there’s a sludgy macheesmo lurking within the lyrics that take on a sexual domination with bouts of traditional hard rock scattered about in the main verses and simple synths to maintain that darker tone. It doesn’t necessarily go anywhere musically, but puts the focus predominantly on the lyrics to drive it all home. Some of this is also felt in “Darkness Falls”, a track dedicated more to metal and honor with an obvious modern rock Pearl Jam style that bares its fangs nicely in the chorus. While good, it does end up the weakest offering, not quite feel as professional as the others, but something a bar band looking to play to your standard edgier radio audiences.

But, all that said, it can sometimes be hard to completely leave roots behind. There is still some obvious Iced Earth felt from time to time, which has been an obvious influence to the drummer’s time with Beyond Fallen. This is no more apparent than during “Claustrophobia” and it’s hard hitting introduction that leads to a dank, catacomb-like main verse with a gothic spoken word harmonization approach. It may not seem much but it will leave you craving Matt Barlow to start belting out his signature sound which the vocalist just manages to fill that hole, especially when things do gravitate towards that melodic Andy LaRoque guitar style similar to Voodoo-era King Diamond.

Overall, Timeless Haunt is literally a dark grab bag of various influences that range from eighties horror synth and dark atmosphere to everything from rock to power and progressive metal foundations. Almost every song manages to bring something new with it while still sticking to a standard down-in-the-gutter vibe representing life at it’s worst, and even most grim. With a surprising number of songs that will stay stuck in your head for days (if not longer), this debut outing stands as a very impressive debut from a collective composed of some of the best that Pennsylvania’s underground has to offer.

Digital review copy of this release provided by Timeless Haunt.