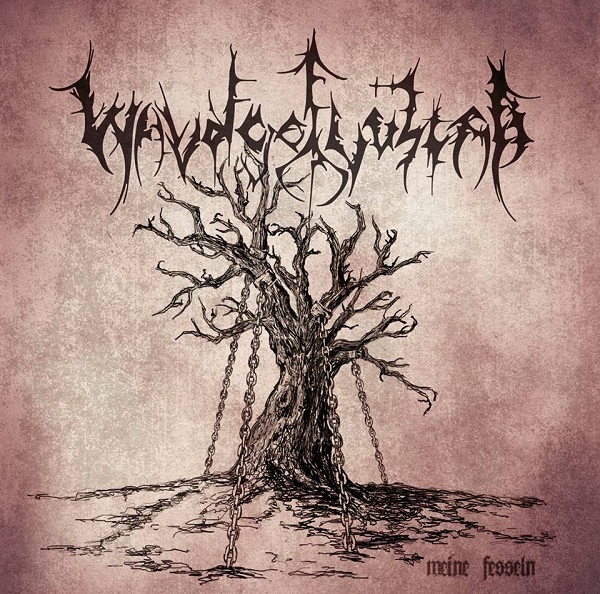 Waldgeflüster, which translates to “Forest Whispers,” is a German based Black Metal group composed of members of currently on-hold band Scarcross. On the studio end, this entity is composed of Winterherz, though he fills the band out with friends and session musicians when doing live shows. Waldgeflüster‘s existence is to pay homage to Black Metal and its complexity, something the duo has done in the studio with their debut offering Herbstklagen in 2009, and with the 2011 follow-up Femundsmarka – Eine Reise in drei Kapiteln. It’s been about three years since their last offering, and now Waldgeflüster gear up to present their third melancholic opus, Meine Fesseln. Will it be another solid entry into their highly revered discography, or is it set to be their first failure?

“Der Nebel” starts Meine Fesseln off with a depressing acoustic guitar introduction that perfectly announces what’s to come. About a minute in emotional leads tear in with a solid drum presence backing them up. While not enough to make you break down into tears, the heavier, faster sections act as the cries of desperation the echoed rasps don’t quite hit. Outside those at the five minute mark, the clean vocals that pop up give the sensation of standing by mourners at a funeral, possibly your own, made stronger in the last two minutes thanks to the richer music and slight Pagan environment with some Shoegaze influence in the chords, the latter a touch that appears throughout the albumd.

“Trauerweide Teil I” opens with an extensive audio sample of a raging storm before pushing forward with a dismal slower pace that sounds a bit forlorn until the latter chords give more of an out of body environment to it, making the perfect opener for “Wenn die Morgensonn…” The slower start feeds that spiritual presence a little further before the incredibly depressing chorus kicks in. Like in “Der Nebel,” there are acoustic breaks, such as around two minutes in where chirping birds accompany that very shift, but retaining the atmosphere. However, the breakdown about seven minutes in does kind of push the limit of what Waldgeflüster can get away with. While it suits the flow, it leads to some thinner music, and the sudden jolt is hard to look past no matter how many times you hear the song in its entirety.

Not all songs on here have to hit the double digits to be enjoyable though. “Karhunkierros” uses haunting cleaner distortions on the tight lead chords in the main verses and bridges to bring out a depressing overtone to the venomous traditional Black Metal foundation. About three minutes in a stronger Shoegaze approach kicks up, sometimes having a marching pattern from the drums in the background you might not pick up on right away. No, it doesn’t quite live up to the longer performances, but it still hits the spot, unlike “Mit welchen Fesseln” which needs that time to make the climax worth it. This is the longest track of all, often moving at a snails pace with strong lead chords and plenty of clean singing, even an intriguing hint of Industrial through the keyboards about seven minutes in to create a night time skyline before building into a late night journey thanks to the beautiful leads that become distorted and creepy a few minutes later.

In the end, the only gripe that can be said about Meine Fesseln is that most of the emotion on display just isn’t powerful enough to actually manipulate how the listener feels. Instead it paints vivid landscapes that tell you what the impact is meant to be, guiding you by hand through each world instead of leaving you to discover and embrace it all on your own. Between mixtures of Shoegaze, Depressive, and Progressive Black Metal, Waldgeflüster have a little something for everyone on this release without it being cluttered. Each song moves fluidly from start to finish, even if there is an abrupt shift or breakdown, making the extensive track lengths a pleasure to sit through instead a curse to endure. Meine Fesseln isn’t just another album, but rather a journey through the melancholic seas fans of the bleakest of Metal genres are going to love.

Digital review copy of this release provided by Bindrune Records via Catharsis PR.