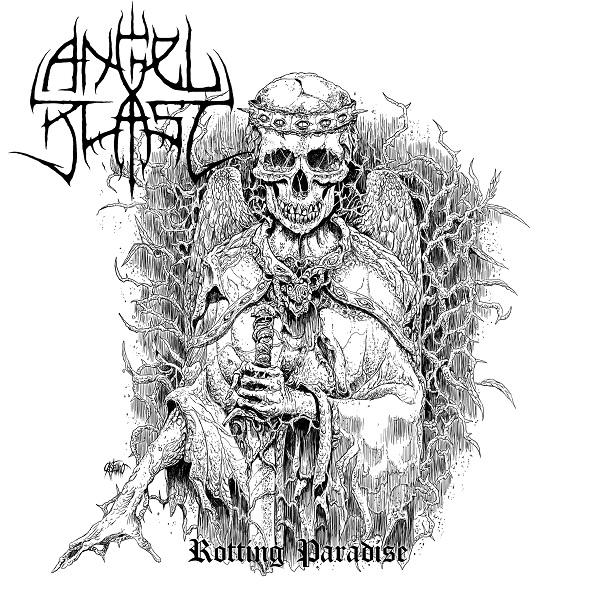 According to the accompanying press release, AngelBlast is a brand new outfit composed of members from Excruciate and Darkened, the latter being label mates given this new outfit recently signed to Edged Circle Records. Their debut outing is nothing more than a three song seven-inch vinyl/digital release titled Rotting Paradise, boasting comparisons to plenty of nineties old-school death metal and “Swedeath” legends ranging from Morbid Angel to Malevolent Creation and even Necrophobic. But does this just over eight minutes long EP accomplish what it sets out to do, or does it fail to leave even the most memorable of indentations upon the minds of those privy enough to give it the time of day?

One thing this brief introduction does right is set up a haunting atmosphere that straddles the line between face-melting aggression and hypnotic grooves with that sweet Swedish melodic steel. “Rotting Paradise” introduces a heated hatred with furious blackened riffs and an uncompromising drum presence that refuses to stop. Like a mixture of Morbid Angel and Behemoth, AngelBlast pulls out all the stops to make their first impression a memorable one, and they succeed even during the slightly cheesy b-movie-esque build towards a solid guitar that basks in the horror aesthetics the group effortlessly throws about.

Meanwhile “Descending of the Immortals” shows off more of the aforementioned early melodic black metal input while also incorporating an epic level without having to resort to orchestral keyboards, focusing more on the energy and rapid-fire drumming to stir up fires even Unleased and Aeon would envy. While the title-track acted as a warning for the hostility AngelBlast can bring with them, this one takes the pile of ashes left in its wake to weave something far more eerie with hints of ritualism scattered throughout, acting as a solid closing to the intense narratives before wrapping with the brief instrumental conclusion of “Incarnation of the Fallen” which feels like the penultimate conclusion to the hellfire prior that acts like the devastation the title alludes to.

Rotting Paradise takes the blueprints of nineties old-school Swedish death and mixes it with nightmarish modern blackened death metal structures to weave a venomous path of burning hatred that doesn’t come with a warning, but rather a story of the chaos left in its wake. For a debut outing, this EP stands as the textbook definition of “short-and-sweet”, establishing this new band as one that doesn’t command your attention, but rather easily makes you instinctively follow blindly and obediently. One spin and you’ll not only find yourself immediately hooked on AngelBlast‘s brand of mayhem, but craving there were more than just these few offerings that are more a cock-tease than your local reformed nymphomaniac.