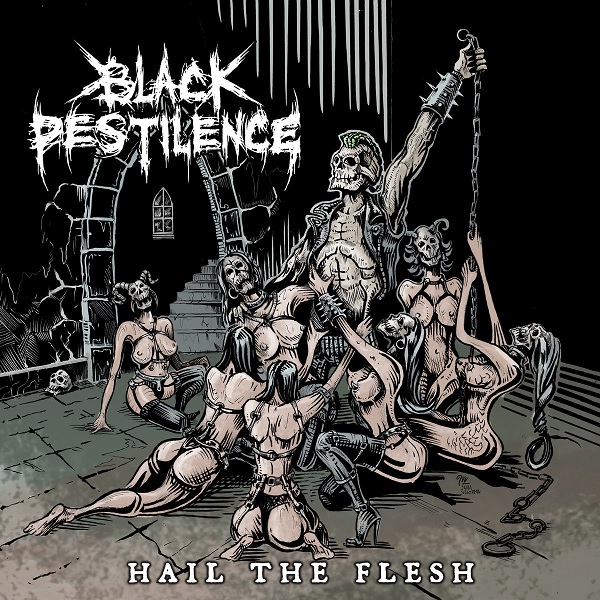 Calgary, Canada’s Black Pestilence formed back in 2008, and the three-piece has been lurking and evolving through the underground ever since. What initially started as a noise black metal trio with their 2009 debut Vice has evolved with each new album, branching out to various other styles including (and primarily focusing on) punk and crossover. They also have remained independent as of late, issuing each release on their own as opposed to putting their faith in a label following the release of their 2013 effort In Defiance through Fungi Records. This tradition continues with their sixth studio album, Hail the Flesh. Has the group continued to grow, or is this just more of the same old blackened punk we’ve been subjected to since the style’s revival a number of years prior?

Hail the Flesh kicks off with the title-track, a hard-hitting appetizer of the chaos to come as it jumps from crossover venom with random two-step breakdowns that seems a bit out of place against the hostility, but falls right in line with the likes of Children of Technology, Municipal Waste, and the more obvious solo days of Toxic Holocaust. “Spurn All Gods” takes that thrash and punk influence, but the death hook of the main verses blurs the lines between Amon Amarth and the melodic tendencies of Kreator or even Skeletonwitch, molding all established styles present into one uncompromising assault that sinks its fangs into your throat and refusing to stop thrashing about through the four-minute long performance.

“Godless” is a superb track that effortlessly brings in that same blackened crossover vibe “Hail the Flesh” introduced you to, but in a far more explosive scale at times. There’s also a horror punk bridge that doesn’t do much to the overall song, but it doesn’t do any harm either. If anything it feels like a random trademark of the group as you will pick up on it from time to time, as well as some darker leads on par with hooks found on an October 31 album. Even “Frauds to the Throne” works in some subtle Misfits creepiness to some sections.

Sadly, not every track here is a hit though. Well, at least from a studio standpoint. “Hellfire” has more of a Gwar dirty punk vibe to it musically and lyrically, but it just never really seems to kick into gear and clear the mud. The only real saving grace behind this one is it seems suited more for the pit at live shows, feeding them the energy that this recording couldn’t really capture. And then there’s “Cloven Division”, a throwback to the group’s noise days. Outside the brief faster hooks, much of this one is just a steady drum beat and simpler chords that just hammer away at the same pace, droning on without much to keep you engaged. In fact, “Ephemeral” does a better job at this with it’s apocalyptic sounding introduction that bleeds into the cold, churning, and miserable track that feels like something that would fit unironically on Cradle of Filth‘s Nymphetamine album.

While “Ephemeral” is an interesting way to close out a largely energetic album like this, it does help to remind listeners of the olden days while calming down like an aural downer from the heart-pumping anarchy that kicks things off. Hail the Flesh shows the group is still looking forward while not forgetting their roots. When Black Pestilence hits fast and hard, it leads to some catchy and intense material that black metal, punk, and crossover fans are going to froth at the mouth over with enough variety to tickle the fancy of those looking for a little more. Sure, that latter part can be a bit of a hindrance, but Hail the Flesh still has plenty of memorable cuts to keep you coming back for more.