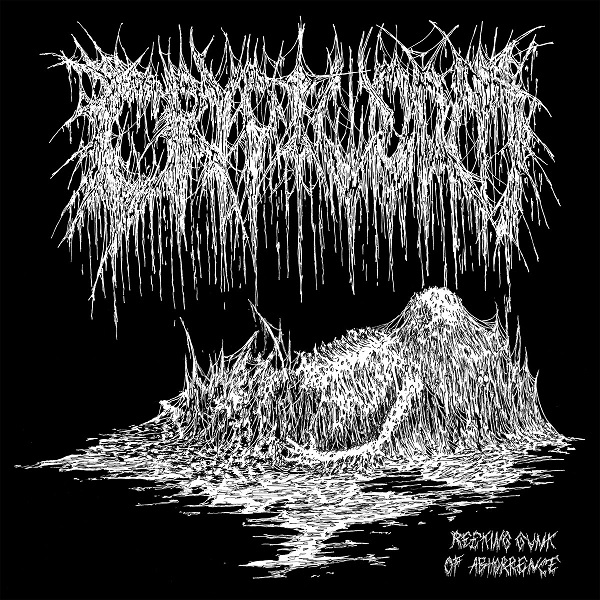 The UK death metal duo Cryptworm have been slithering in the depths since 2014, but haven’t released too much from the studio. It’s no surprise given the activity of drummer Joe Knight (Haunted Sanity, Swarost) and Tibor Hanyol (Coffinborn, Morbid Carnage) on bass, guitars, as well as handling vocal duties. Their self-titled demo dropped in 2017, the Verminosis EP a year later, then a split with Archaic Tomb in 2019. For 2020, they find themselves working with Me Saco Un Ojo Records for a second EP titled Reeking Gunk of Abhorrence. But how does this four song effort stack up?

Low-tuned and lo-fi, Cryptworm continue to channel the churning death metal sound of veterans like Incantation and Immolation. While those are the best comparisons for the band’s foundation, the two-piece is not afraid to throw in some Autopsy or Exhumed to the mix. Of course, the latter end up some of the more fleshed out/memorable tracks given the band can kind of get carried away when focusing more on the deep brutality of it all to kick things off.

Blast beats and growls introduce the bludgeoning on “Festering Maggot Infestation”, giving way to some solid splatter thrash that allows Joe’s drumming to pave the way forward. That is, until the hardcore break that ushers in an amalgamation of different styles that cause the song to become a bit of a confusing mess that overstays its welcome about three-and-a-half minutes in due to how nloated the entire second act becomes in addition to a conclusion that refuses to give up the ghost.

Meanwhile “Reeking Gunk of Abhorrence” shares some similarities to it, but the five minute plus composition seems more focused overall. The fast mix of thrash and hardcore influence in the uncompromising death metal brutality flows smoothly from start to finish for a much more aggressive piece. It does slow down momentarily, but breathing only for a well executed slam towards the end to wrap things up with a subtle commanding finish.

And then there’s “Self-Dismemberment”, which is a truly different beast. Uncompromising from start to finish, that Exhumed touch takes a backseat to the sheer brutality the duo can incorporate and keep everything grounded. That before things churn through the top soil with “Cesspool of Perpetual Decay”. This is the most helpless offering that crushes like the most disparaging of doom metal compositions one can find before unloading some Cannibal Corpse worthy grooves that don’t always transition well into the slam style like around the two-minute mark.

While Tibor’s influence from his time in Coffinborn and Necrosodomy can be felt on this release, Joe’s drumming often takes precedent. Reeking Gunk of Abhorrence is something fans of slam death and the thrash/hardcore influence will appreciate it, but it’s the latter that ends up standing out the most. This new EP is a good offering that puts both the best elements of the group, as well as some of its flaws center stage. Dominant, burdening, and at times fun in a sinister manner, Cryptworm continue to show why they are a two-piece to keep an eye on, even if it seems the band needs a little more time to grow.

Digital review copy of this release provided by Me Saco Un Ojo Records.