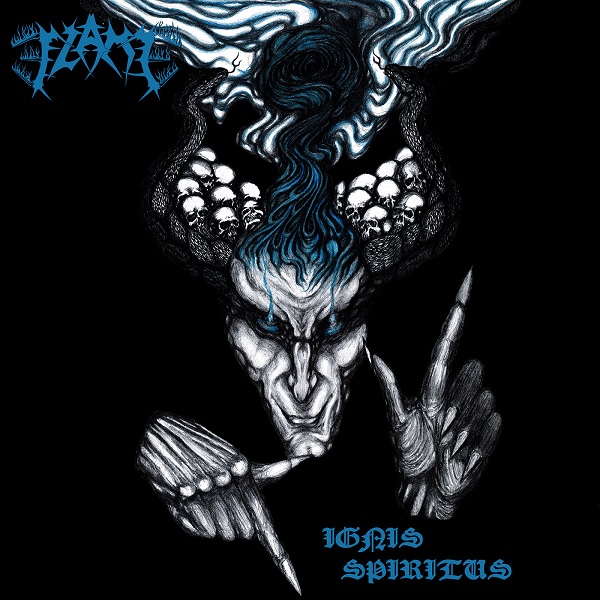 Fans of blackened thrash are more than likely aware of the smaller two-piece based out of Finland called Flame. The band has been active since 1998, but their discography is fairly small. Thankfully that doesn’t represent the quality of their releases. Much of their legacy is composed of demos, eps and splits. However, two full-lengths have emergenced, spaced quite far from one another. Into the Age of Fire dropped in 2005, and March Into Firelands in 2011. The duo find themselves still working with Primitive Reaction, unleashing their latest EP Ignis Spiritus in August of 2020. Is it one worth the lengthy wait, or is this new session better left in the depths of obscurity?

Like prior outings, Ignis Spiritus has a rougher, heated production quality that screams analog without forsaking a modern crispness that helps making the “Intro” track a bit haunting before heading into the pounding “Firespirit of Rebellion”. The marching drum patterns of the main verses build a hostility that the infectious chorus kind of takes away from, but thankfully not in a bad way. The melodies continue to assert a bit of dominance while putting the listener at ease, as if to say all will be well between the bouts of obedient demands and a creepy conclusion that brings in a subtle darkness that drifts one further from life itself.

That firey tone continues through the EP, though “Primordial Storm” takes that melodic chorus into more of a viking-themed atmosphere without losing the commanding presence of the drums or the slower pacing that feels more akin to a memorial than anything else before sanity breaks and the storm unleashes its fury to wrap up the performance. Even “Astral Crypt” manages to weave in a hint of progressiveness in the guitar solo that has a bit of an Egyptian touch to feed into the Lovecraftian ramblings of the Necronomicon Exmortus and the Mad Arab himself in a shortlived bout of progressive exploration.

The only downfall to this release ends up being the closing track “Force and Fire”. While far from a bad track overall, the slower segments do seem to pad out the song , not to mention some of the faster verses feel more like a rehash of “Firespirit of Rebellion” towards the end. You could argue that could be said about the other tracks as well, but at least they present a unique enough attitude to not feel as if the band is just retreading something that works well for them. Now, had this been another three to four minute offering then some of these issues wouldn’t be as glaring or at times as tedious as they can be. Sadly, this is not the case and if they had done something a little more with the main passages and held off on some of the extensive bridges or interludes, this one would have flowed a lot more smoothly from start to finish than it does.

As anyone familiar with Flame would expect from the band, the duo show their dexterity perfectly in just a short amount of time. In just a few songs the listener is assaulted with one commanding, hellish landscape that seamlessly blends with melodic mourning and even a con-man sensation of safety. Sure, this may only be four songs and an intro after five years of silence following their previous Studio Perkele Sessions EP, but again we’re presented with one solid, hard-hitting cut after another that you’ll come back to time and again for a quick rush of top-notch blackened thrash. If you haven’t heard of Finland’s Flame before, than this new EP is the perfect jumping on point to finally make their acquaintance.