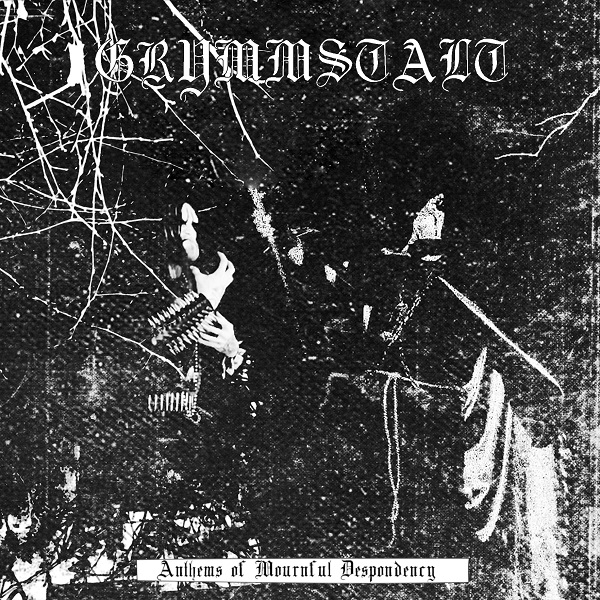 When it comes to the underground world of black metal, there are many acts known to churn out multiple releases, if not be involved with other groups. Those familiar with that very world may well know of the musicians Wampyric Strigol and Lord Valtgryftåke. Both are active in numerous other outfits including (but in no way limited to) Wampyric Rites, Aurae Lunae and Winterstorm for the former, and 13th Temple, Old Castles and Evighetens for the latter, while both are active in Winterstorm They and a number of their ocontributions to the genre belong to the collectives Pure Raw Underground Black Metal Plague and Valdivian Black Circle [according to Metal-Archives]. So it should come as no surprise that they would forge together another outlet named Grymmstalt. The year of formation is unknown, but their initial demo Endlichkeit released earlier this year with cassette distribution handled through Mahamvantara Arts Records. The duo did not sptop writing, however, coinceiving enough for their debut full-length effort Anthems of Mournful Despondency to close out the year from Signal Rex. But does this new venture offer more quality raw black metal to the collectives, or does it end up just another cassette among the many uninspiring offerings littering the style?

Anthems of Mournful Despondency indeed falls into the raw category. As usual, the analog quality finds the music muffled and pushed into the background with a slight echo. There’s nothing frostbitten or with fiery rage like many cassette ventures within this niche outlet, but rather a grayish haze that hits more like a memory one is experiencing through an old projection reel. Given the album’s concept of growth towards being a living thing, it does suit what the band is going for, though it ultimately hurts the album overall by removing much of the bite and leaving a flat sounding recording greatlu neutered of emotion. You wouldn’t know this right away though, as “Seelenangst” starts off with a thick, deeper output that ex3emplifies the good of the raw black metal style with a subtle folksy undertone that eventually shifts into melodic horror punk by the five minute mark. This is where it shouled have ended, but instead

Clearly the notes about the audio doesn’t mean there’s nothing of value here. While the audio itself leaves a lot to be desired, there are some shining elements within the rough. “Wehmut” clocks in at over nine minutes, and within that time has a great deal of catchy material you’ll bob your head along to, not to mention some rich depressive wails that echo against hooks that give off a slight chill that easily could have presented a far colder state of unbeing had the audio been better. That conclusion also finds the bass kicks almost non-existant, unlike on “Nachsinnen” which pulls them and the rest of the kit to the forefront. Sadly, some of the haunting wails at the beginning start things off in more of a comical means…

The other massive downfall to Anthems of Mournful Despondency are the atmospheric ghastly wails found throughout the album. A staple for atmospheric and depressive/suicidal black metal, it often aides in maintaining whatever mood the group is going for, though more effective in the analog format versus the clear digital output of today. Here, sadly, the howls end up ruining the tone. The rhaspier ones are fine on their own, but the ones that sound more human simply don’t work. The come off more like if King Diamond himself were cast as the villain pretending to be a ghost in an early-era Scooby-Doo episode, or in the case of “Nachgiebigkeit” the equivelant of someone coming up to you and just saying “boo”. This ends up hammering another nail into the coffin that holds the quality musicianship you know is there at bay.

Despite those issues, “Nachgiebigkeit” is one of the better tracks. Thankfully much shorter “Schmerzan” essentially saves the day byu getting just about everything Grymmstalt are trying to achieve correct. Things kick off sounding even worse and severely muffled, but as the performance picks up that emptiness goes away. Everything just sounds right in a leveling way, allowing the aforementioned moans to sound good, effectively helping to create a darker song with emotion you can actually feel. Nothing is drawn out for the sake of extensive story telling either, leaving this opus to fade out akin to that spark in one’s eye as they fade from existence.

Musically, Anthems of Mournful Despondency is a good album of brooding exploration of coming into existence. From a technical standpoint, however, it simply isn’t. Wampyric Strigol and Lord Valtgryftåke have a history of creating kick ass black metal, and this album is no different. The problem is the lack of bite, as if someone took the recordings and decided to neuter it. Behind the dull mastering is a quality album waiting to be heard, and hopefully one day remastered so we get to hear it. Until then you get to play “find the diamond in the ruff” while trying to stay awake listening to this lifeless full-length debut.

Digital review copy of this release provided by Signal Rex.