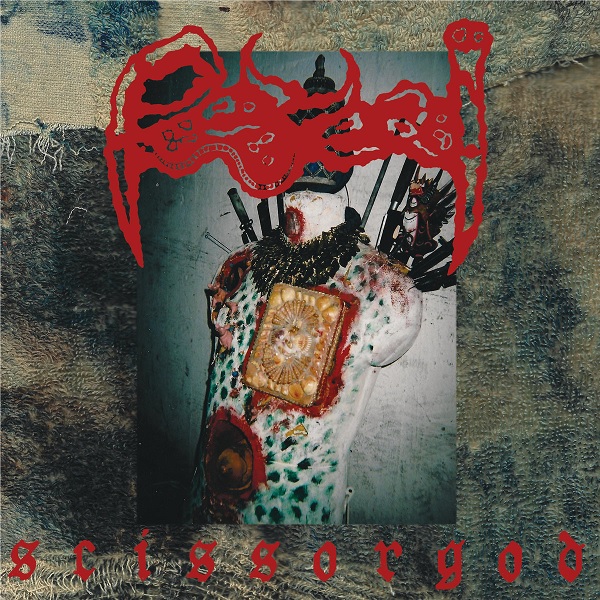 Originally formed as Waster back in 2006, Sweden’s Reveal took their black/thrash metal inspirations and ran in a fairly different direction over time. The four-piece act established themselves as a mixture of those staples, but with a hint of psychedelic rock and experimentation, leading to the underground success that was their second full-length effort Flystrips through Sepulchral Voice Records. Fast forward three years and we now face their third studio album, Scissorgod, which appears to change things up a little more. But are some of these diversities worth it, or does this actually take a step back from what the group is capable of?

Unlike their prior outings, Reveal have drifted away from the soft, warm, even fuzzy analog sound that worked to compliment the turntable style audio quality that helped accentuate the psych/experimental rock aspect of their blackened presence. This causes a surprising distance between this recording and Flystrips by painting the aural landscapes with a midnight darkness that is as empty as the emotion in some of the songs this time around. Of course the reason for the change in how things sound is more than likely due to the slight change in direction, taking on more of an eccentric technicality to the music that seems more mathematic than catchy for the sake of being avant-garde.

“Scissorgod” welcomes the listener into this new musical venture with an off-kilter performance with creepy leads and harsh vocals that do a good job of coming off somewhat unhinged. While it sets up a good atmosphere, there’s little support to them, making it all uninspiring and robotic. It isn’t until the horns kick up about two minutes in that things start to take shape. The guitar solo adds some much needed richness that heralds in a brief spiral into madness before dropping it all to go back to the cold main riffs once more to end on an incredibly boring note. Even “Decomposer” comes off as bland for such a simple and haunting piece. What starts off strong and at times emotional just never quite pays off and goes on for way too long, as if a lengthy stake out that ended awhile ago but everyone is just lingering about to rack up hours on their time card.

“Harder Harder” is one of the few tracks that truly stands out, and it really didn’t take much for it to do so. There’s less intricacy and focus on being unnerving, which surprisingly makes the cold and unsettling approach of the album far more effective. This is achieved by allowing the music to be much richer thanks to some melodic hooks, additional warmness on the slight echo of the guitars, and a stronger presence in the bass, drums, and even vocals that can briefly channel the late Wayne Static in how they can be delivered. This leaves behind a much tighter song you’ll remember more fondly compared to some of the more technically driven tracks scattered about.

Come “Down Through the Hole”, things start to fall into the standard realm of song writing, and it’s a welcome change in that the compositions continue to grow richer after this traditional black metal offering that is unique in the sense that it sounds like what one expect the style to be if performed in the sixties or seventies. “The Plot Thickens” stands out the most though, despite being more of a standard psych rock track. It manages to hurl some otherworldly riffs at the listener about half-way through, taking on almost a science fiction alien invasion vibe that suits the tone of the song and makes for a very well executed transition point heading into the solid guitar solo to ushers in the closing of this otherwise catchy as hell performance. This also is an effective way to get you riled up for the highly enthusiastic “What Pigs Get” which takes that psychedelic approach and crosses it with some horror punk and melodic black metal riffs that are complimented with a much harsher Abbath style vocal presence.

While Reveal does ultimately take a few steps backwards with this outing compared to their previous ones, there’s no denying that when they are on point they can weave some truly electrifying, if not generally catchy material. Fans of Flystrips will more than likely be let down initially given how the crisp audio dulls the impact of some songs here (especially at the start), but the pitch blackness of the studio does accentuate some of the unnerving elements in a way the prior warm and fuzzy approach wouldn’t showcase in a conceptual manner. Sadly that tone doesn’t stick throughout and many less eccentric ones still end up suffering from a blank emptiness that feels out of place. But, don’t let the first few songs deter you. Scissorgod as a whole is a pretty good effort that will take a few spins to appreciate, though leaves you wondering what could have been if things were as it once was even three years ago…