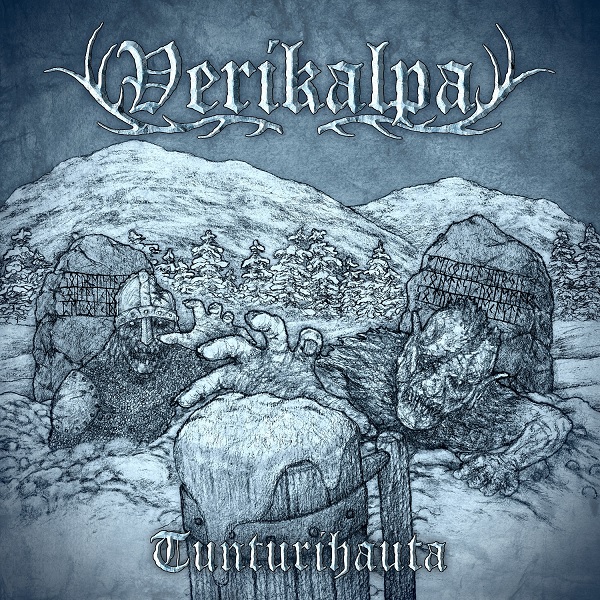 Finnish folk metal act Verikalpa formed back in 2006. They issued two singles before finally signing with Inverse Records for their debut album in 2018, then moving over to Scarlet Records for their follow-up effort Tuoppitanssi in 2020. They’ve stuck with Scarlet for their third album, Tunturihauta, which is due to drop shortly. With so much time to nurture their sound prior to a proper studio/label debut, one can imagine this six-piece’s latest will be a solid one full of the folklore of their native country. Right?

Well, once you get past the introductory chaos and shouting on “Verikauhu”, Alestorm and Finntroll immediately come to mind. On many songs, the former is more evident and often feels ripped off from the band’s first two albums. When it comes to those songs, the only real differences are the keytar is an actual keyboard with a sligthtly different effect, and the vocals are a much harsher, rhaspier approach despite still having a similar cadence to Anthony Bowes.

“Verikauhu” ends up being one of the more original performances, not to mention energetic. That sea shanty sound does rear its head about halfway through when the pace slows down, but glimmers of a unique aggressive folk approach with hints of Finntroll circa Nifelvind. “Rautanen Herra” races forward with more of that Finntroll aspect right down to the keyboards establishing an humpa rhythm to convert the more serious, hard hitting track into one of the most fun offerings presented here. Finally there’s “Taisto”, which easily the most memorable track that shakes most of the influences off for a more original piece that shows the true potential of the group.

However, things change up significantly and take a more Alestorm approach fairly quick. “Riitti” starts off with the guitars chugging along innocently enough, but its the chorus where Verikalpa copy their homework without many changes, and left me questioning if Scarlet Records accidentally sent the wrong CD. “Tunturihauta” sounds like it was torn from Captain Morgan’s Revenge as well, but that’s more in the chorus given the main verses can be likened to something Manowar would release sans the faux-accordian, And of course we can’t forget the far more Korpiklaani driven “Hurmos” with a far more hostile fantastic atmosphere that hits like a grim burden placed begrudgingly on your shoulders.

With all this said,is Tunturihauta a bad album? No, though more times than not it doesn’t really feel original [and I hope like hell the muffled audio quality is due to a low bitrate rip sent to reviewers and not the actual quality when it hits store shelves]. Once you get past the obvious comparisons, much of the album ends up a pretty damn fun romp with a fair share of more serious or slower tracks that offer a decent amount of range from Verikalpa. Upon first spin I scoffed and was ready to write the band off as nothing but Alestorm worship. While there is a decent amount of it slapped right in your face on a number of tracks, you’ll find Tunturihauta is a nice folk smorgasbord with a plethora of enjoyable tales being told if you sit down and really absorb the album as a whole. It’s not a milestone of any sorts, but needs To be taken more than at face value to appreciate.