REVIEW – Six Feet Under: Nightmares of the Decomposed 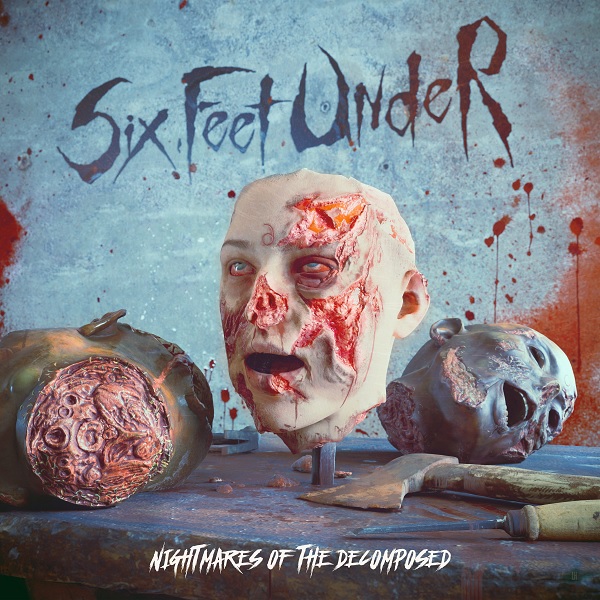 Six Feet Under have not had the best of receptions from many over recent years, and justifiably so in some cases. It’s been thirty-five years now since Haunted, their debut outing, had dropped. If the band has been anything it’s been consistancy in maintaining relevancy by putting out new material in a timely manner. That said, we’re looking at their seventeenth full-length effort Nightmares of the Decomposed through Metal Blade Records to round out 2020 and, of course, the bandwagon of tearing the album apart was in full force once again. However, is this new effort one worth the hate, or is it something much more promising than most are willing to let on?

Well, to be blunt, there’s maybe a handful of good tracks littered about this new release. “Amputator” is a shot of adrenaline straight into the vein with solid high-speed riffage and drumming that helps assert the groove in the guitars. But then you have Chris Barnes chime in and, surprisingly, it isn’t what you expect. Kudos to the sound engineer for making the rougher approach work and burying the obvious faults in it within the speed of the instruments save for the bad pig squeel at the very end. Even that doesn’t do much to hinder this one though, leaving it one of the more memorable cuts from the album next to “Blood of the Zombie” which is just a fun, groove heavy track that nicely captures an eighties horror atmosphere that breathes down the back of your neck as if death itself were lurking in the shadows around you.

But then you hit “Zodiac”, a slower paced offering that blends the group’s groove oriented death metal with a funky sixties stoner rock vibe that concludes in a haze of pot smoke. Musically, this isn’t that bad an offering, but the vocals do leave you wanting a little more given how empty the track ends up being. This one also just ends up sounding random coming up after such a hard hitting start, slamming the brakes on the death train just after leaving the station only to venture into traditional death metal territory once more with “The Rotting”, which kind of justifies a theory I have about Chris Barnes in the studio.

When you listen to a modern Six Feet Under album, Barnes’s vocals sometimes feel like they are at maximum effort for the sake of cutting corners. It reminds me of Calculon from Futurama when he was told they needed to do a second take and he had never heard that phrase before. “The Rotting” starts off with somewhat deep gutturals, but shortly after it starts those growls show signs of fatigue and becoming more of the harsher approach we’ve come to know and expect. Why would it be this way if Chris didn’t do it all in one go? It doesn’t sound like additional effort to change the pitch intentionally was applied, so it would make sense that maybe it is all done in a single go to save time, money, or pride to the detriment of the final product.

Getting back to “Zodiac”, however, this slower pace is really what end up doing the most damage because there’s little to cover some of the rougher aspects of the vocals, not to mention can just end up pretty boring. Both of those are on display on “Migraine”, which isn’t too bad at the start but slowly degrades with even simpler riffs, more barren spots in the music, and a forced cannabis vibe that once again grinds things to a hault so hard it causes what the title advertises out of general frustration that only continues with “The Noose” which jumps from a few bars of creeping speed and zero strings to furious guitar work for a few moments, repeating until an ok down-tuned solo that is only slightly more engaging than this song is prior to the sudden experimental conclusion that begs the question “Who suddenly took the acid in the studio and thought this was a good conclusion?”.

Anyone who still follows Six Feet Under will know that not everything the group has turned out lately ends up hitting the mark. Sadly, this is one of those efforts for some of the obvious reasons, but I can’t justify jumping on the bandwagon of bashing this album. Yes, there’s a few songs on here that simply do not work. The slower, emptier cuts that try to incorporate that sixties stoner rock influence are a nice experiment, but end up blemishes to an otherwise good groovey death metal album by driving headfirst into a brick wall and sputtering forward until they hammer the dents out. It’s easy to sit back and mock this for the vocals as well, but for the most part Chris sounds fine when the music is rich enough. That said, Nightmares of the Decomposed may take a few spins to appreciate it [it took me three as the first two I fell asleep shortly after “Noose”], so give it some time to grow on you as there are a select few infectious tracks with the rest being more good tracks than there are those that range from bad to abysmal.